Is Ducted or Split System Air Conditioning Better for a Melbourne home?

Melbourne has a reputation for having “four seasons in one day”. It’s a phrase that highlights not just the extremities, but how quickly the weather can change. Since our homes help shelter us from some of these extremities and abrupt changes, it’s only natural to ask whether ducted air conditioning or split system air conditioning is the better choice. We swear, if it was a black and white matter, we’d tell you a straight answer, but it’s a little more complex.

This is where two different customers, let’s call them Lenny and Kenny, come in. They both have a wife and a young child, and as a part of doing some home renovations they are looking at new air conditioner systems. Lenny has a high disposable income and prioritises keeping his spacious house neat, uncluttered, and comfortable. He wants a system that will cool or heat their entire home. Kenny lives on more of a budget, enjoying a small home where the family tends to congregate in specific areas. He primarily wants to keep their living room at a comfortable temperature.

To help them understand the pros and cons in order to work out which air conditioning system would be better, we answered a few of their questions.

What is Ducted Air Conditioning? In a nutshell it is air conditioning that works through a ducted system throughout the house.

The roof space houses a central fancoil unit with a series of ducts that bring the cooled air into the various rooms of the house. Just like the Split System Aircon, it requires an outdoor unit positioned outside your home. This is usually double in size.

A thermostat provides control over the system, and in modern installations, typically zones the air flow so that you can control the temperature in different parts of the house. (As opposed to a standard ducted system which operates throughout the entire home from one control).

What is Split System Air Conditioning? A split system air conditioner works through the use of two main units as well. The internal unit disperses the required air temperature into the house, while the external unit draws in air from outside the house and adjusts its temperature. The internal unit will struggle to cool beyond a small enclosed space, which means you will likely need additional units for each room.

When you see an air conditioning unit in someone’s wall, you are looking at the internal unit of this split system.

What Are the Key Differences Between Ducted and Split Systems?

Ducted air conditioning requires more effort, specialist installation, a suitable home, and typically a larger upfront cost. Depending on the size of the house it usually starts around the $8,000 mark for a full set up. Split systems are typically cheaper to install, and can be installed room by room if you need to spread the cost out over time. These units tend to start at the $2,000-3,000 mark, depending on the unit capacity.

Split System units run on an individual basis, which means their running costs can be cheaper than a ducted system operating throughout the whole house. However zoning ducted air conditioning (so that you can turn it on for individual rooms) will help control where it is running and can potentially result in more efficient running costs.

Split Systems are very effective for small and single rooms. A larger 8kw unit will be needed for effective cooling in a larger room. Ducted air conditioning is better to cover large areas and for controlling even temperature throughout the entire house.

As technology advances, noise issues reduce. Split systems can be remarkably quiet nowadays, however ducted air conditioning units are more quiet. A noisy split system is typically an indication that there is a problem that requires maintenance.

Visually the ducted system is fairly discrete. The outlets are relatively flat, small and installed in the ceiling. Split systems are bulky, visible units on the wall. Both have outdoor units called compressors outside the house.

Some homes do not have the roof space to install ducted air conditioning, rendering it impossible to install. Existing 2-Storey homes may also face issues running ducts downstairs making it difficult to heat or cool the downstairs area with this system. In such case, you could install a smaller ducted air conditioner for upstairs and install Split Systems downstairs. Split systems require suitable wall space to install. Both have external units with copper piping connections which run to the indoor unit.

While the extent of use and environmental factors (including animals getting into internal systems) can impact either system, ducted air conditioners typically last longer. On average they last around 10-15 years before the major components need to be replaced. Depending on the type of system installed, split systems typically last 5 to 10 years before needing to be replaced. Proper maintenance and regular filter cleaning help prolong a system’s life, whereas lack of maintenance will shorten it. Regardless of which system you choose, you need to ensure you get them regularly serviced and stay on top of keeping the filters clean.

Air conditioning units that are well maintained, regularly serviced, and replaced when needed, should not pose a significant risk to your home.

A poorly maintained split system can become contaminated and spread illness which can lead to health risks. Although a general service can prevent this to an extent, a premium service known as an ‘eco-clean‘ will do a much thorough job at removing these contaminants.

Both split systems and ducted air conditioners are typically reverse cycle, which means they will both also work as a heating system. So Which System Should I Choose?

After having the pros and cons explained, both Lenny and Kenny understood the key differences between the air conditioning systems and could immediately see which system they wanted to install.

Lenny couldn’t stop raving about the value of adding ducted air conditioning to his home. He didn’t have to worry about any unsightly units, and he could confidently maintain an even temperature through his whole house.

Kenny was delighted to find a budget suitable solution that gave him the flexibility to expand the system down the track. The split system unit was perfect for keeping their living room cool, and straight forward to maintain.

So what we’re really saying is that whether ducted air conditioning or a split system unit is better, ultimately depends if you’re Lenny or Kenny.

GET IN TOUCH WITH US 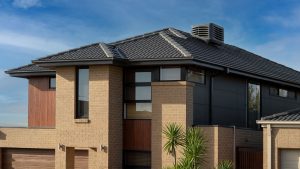 Evaporative Cooling for your Melbourne Home 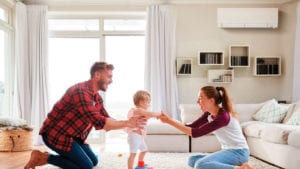